The history of cloves dates back to many centuries, just like other spices. Believed to be one of the first spices to be traded, evidence of cloves has been found in vessels dating back to as early as 1721 BC. Originally from Moluccas Islands in Indonesia and southern Philippines, cloves were a prized commodity by the ancient Romans. Not just Romans, even the Chinese treasured them and used them in around 226 BC.

Cloves have been popular in dentistry as a local anesthetic due to the presence of eugenol and beta caryophyllene which have analgesic properties. Apart from the anesthetic properties, cloves have antibacterial and anti-inflammatory properties which are effectively used in drugs and dental fillings. Studies reveal that daily consumption of cloves can increase the insulin activity by almost three times, thereby keeping the blood sugar levels under control. Including cloves in your daily diet can help in even delaying the onset of diabetes.Cloves act as an aphrodisiac which enhances the sexual behavior in men, without any adverse effects. Besides, they are even used for treating premature ejaculation successfully. Other than these There are number of health benifits from usin cloves. 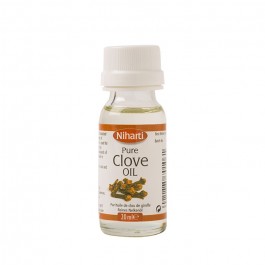 Niharti Clove Oil is extracted from finest quality of cloves. The health benefits of clove oil can b..